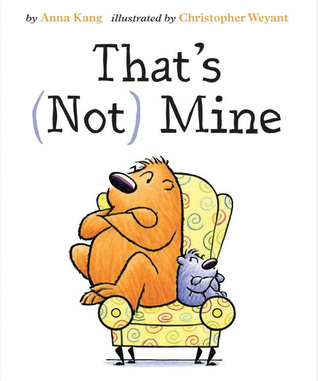 That’s (Not) Mine by Anna Kang, illustrated by Christopher Weyant

Two fuzzy creatures both want to sit in the same comfy chair. The trouble is, they can’t agree who it belongs to. They get madder and madder, until…

With expressive illustrations and simple text, this giggle-inducing tale about (not) sharing and (not) being a good friend features the endearing characters from Theodor Seuss Geisel Award winner You Are (Not) Small.

About the Author and Illustrator:

Husband-and-wife team Anna Kang and Christopher Weyant are the creators of You Are (Not) Small, which won the Theodor Seuss Geisel Award and was named a Notable Children’s Book by the American Library Association. They live in New Jersey with their two daughters, Kate and Lily, a guinea pig named Athena, and a hermit crab named

Olaf.
Anna, a native New Yorker, grew up believing everything was hers until one day she realized it was her brother’s, too. She received a master’s degree in fine arts from the USC School of Cinematic Arts, where the visual storyteller in her was awakened, forever changing the way she saw art, life, and everything in between. In addition to writing, Anna loves to read, travel, laugh, eat, and nap. Visit her online at www.annakang.com or on Twitter @annakang27

Christopher is a cartoonist and illustrator. His work can regularly be seen in the New Yorker. His cartoons are syndicated worldwide and have been featured on the Today Show, Meet the Press, and World News Tonight. Christopher likes to share everything but his personal space on the subway. Visit him online at www.christopherweyant.com or on Twitter @chrisweyant05
My thoughts:

Last year, I shared with you Chris and Anna’s first book, You Are (Not) Small. From the first reading, this book was wildly popular at our house. In fact, a year later, it’s still sitting in our rotating book basket in the living room, and still gets read frequently. And we’re not the only ones who loved it.  Earlier this year, the book was awarded the 2015 Theodor Seuss Geisel Award, an American Library Association award given annually to a book for beginning readers.

So when That’s (Not) Mine, the newest collaboration by this husband and wife team, arrived on our doorstep, there were many grabby hands. The six-year-old, who has read the first book so many times she practically has it memorized, the three-year-old, who immediately recognized the bears on the cover, and mine.
We were not disappointed.
That’s (Not) Mine features the same two bears we’d already come to love. This time, they’re faced with a topic well known to the preschool (and sibling) set: sharing. One comfortable armchair, two bears. One bear who was sitting in it first, but got up.  One bear who took it over.
Sound familiar?  So will what happens next. One clever bear comes up with a way to trick his friend from getting out of the desired comfortable armchair (my 6yo is a pro at pulling this stunt on her younger brother). But it doesn’t take long for the duped friend to realize what has happened, and then the battle is on.
The text is sparse, the illustrations big and expressive against a white background. The result is that each page conveys so much emotion and action, simply. We see the progression from slight irritation , to sneaky retaliation, to satisfied smugness, and then to outright anger as these two friends battle for what is apparently the best seat in the house. It’s a scene that’s played out half a dozen times (or more!) in preschool-aged homes everywhere. Then, as with You Are (Not) Small, the final page leaves the reader with a satisfied giggle.
This book is just so much of what you want your young child to read. It’s silly, and simple, and wholesome, with characters who are real and flawed and lovable.
Just like those preschoolers who won’t be able to keep their hands off it.
Want to win a copy? One lucky winner will receive a copy of THAT’S (NOT) MINE plus an adorable full-color poster. (U.S. addresses; allow 6-8 weeks for delivery.) Just fill out the entry form below by midnight on Friday, September 11th.