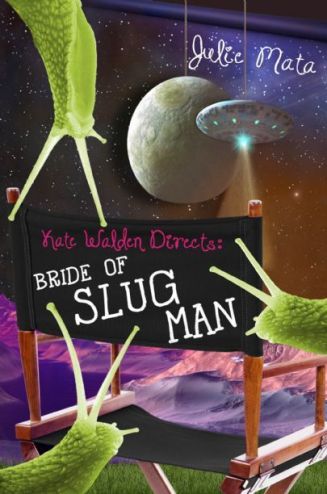 After her huge success with her first feature-length movie, seventh-grader Kate Walden is eager to start on her next film, a sci-fi romance called Bride of Slug Man. When a new kid comes to town from New York City, Kate thinks she might have a new found film buddy-someone to share her interest with. And it doesn’t hurt that he’s pretty cute. But it turns out that Tristan is making his own movie, and now the classmates Kate thought were eager to join her cast and crew are divided. With rumors spreading in school and between sets, Kate finds herself juggling more than just call times and rewrites. And judging from the whispers Kate hears about Tristan Kingsley, she suspects that he isn’t interested in having a fellow film-buff friend; he just wants to prove himself as the best filmmaker in school by winning the Big Picture Film Festival. Kate vows to enter too, and tries to focus on just making the best movie she can. But between the cutthroat popularity contest, a bully situation that goes from bad to worse, and several on-set mishaps, Kate is going to need all the movie magic she can get to make sure Bride of Slug Man hits the big screen.

Julie Mata grew up outside Chicago and currently lives in Wisconsin, where she owns a video production business with her husband.. She loves movies and once wrote and directed her own short film. She also loves traveling, gardening, and reading a really good book. Her first book was Kate Walden Directs: Night of the Zombie Chickens. For more information, including a downloadable curriculum guide and a filmmaking tip of the month, visit her website: juliemata.com.
Twitter: @juliehmata
My thoughts:
Yes, this is a story for film enthusiasts. Like Mata’s first novel, Night of the Zombie Chickens, the plot revolves around Kate and her new film project. This time, it’s not her mother’s evil chickens who are the focus of her camera, but a goopy, slimy creature, inspired by her younger brother’s homework assignment. And yet,this story is really about middle grade relationships…and the rollercoaster of emotions that come with them. There’s the rivalry between Kate and the new kid, Tristan, who himself is a kid film producer. And from New York City, no less! There’s Kate’s internal struggle regarding her bullied friend Doris. Kate knows that what is happening to Doris is wrong, but standing up for her friend isn’t always easy. And there’s mean kid Paul Corbett, who has resurrected Kate’s nickname from last year…Crapkate. All that, and Kate still needs to finish her movie in time for entry in the Big Picture Film Festival.

Here’s author Julie Mata to tell you more about her book in her own words.

In the movie Super 8, there’s a moment when a band of kids is shooting a movie scene at a train depot late at night. Suddenly, a real train hurtles out of the darkness toward them. The director, a kid named Charles, shouts “Production Value!” and feverishly tries to film while the train is passing by. This scene makes me laugh because it’s so true. Directors will do almost anything to add extra sizzle—also known as production value—to their movies.

In Kate Walden Directs: Bride of Slug Man, twelve-year-old Kate is dying to make a science fiction movie but her best friend longs to star in a romance. In Kate’s mind, flying saucers and aliens add sizzle. Romance does not. Throughout the story, she bounces between wanting to keep her friends happy and trying to make the epic sci-fi flick of her dreams.

One of the great parts of writing about a character who makes movies is that I get to research all kinds of fun filmmaking facts. To get ideas for a flying saucer, I laughed through the epically bungling movie Plan Nine from Outer Space, which won director Ed Wood the dubious title of Worst Ever Movie Director. Ed didn’t have a budget for fancy special effects so he tied fishing line to a toy UFO and dangled it in front of the camera. In an homage to Wood, and because it’s exactly what a twelve-year-old would do (sorry, Ed), Kate gets her UFO shots the same way.

Kate even uses a technique called forced perspective to make her flying saucer look life size. It’s all about putting small objects close to the camera lens to make them look huge, and placing people far off in the distance to make them look small. Kate feels pretty pro when she learns that Steven Spielberg used the same technique in Close Encounters of the Third Kind to make a model ship tanker look real. (And I felt pretty pro writing about it.)

Of course, some of the lessons Kate learns can’t be found in a moviemaking how-to manual. She learns the hard way that you don’t have to be a big-time Hollywood director to end up with a big-time Hollywood ego. She also struggles with bullies, friendship dramas, and wardrobe malfunctions while trying to finish her movie.

Writing about Kate has allowed me to combine two of my passions—moviemaking and writing. I’m no Spielberg but I did write and direct a short film once called Bus Driver. You can check it out on YouTube but be warned, it doesn’t have cool flying saucers or alien creatures from Mars. I guess I was out-sizzled by my own MC.