March 26, 2014
Guest Post: Holly Schindler and The Junction of Sunshine and Lucky 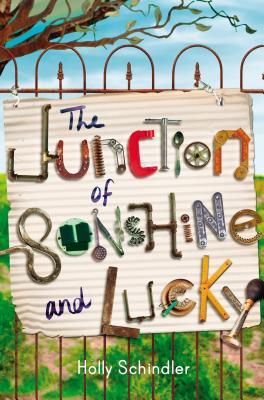 The Junction of Sunshine and Lucky

“Beasts of the Southern Wild” meets Because of Winn Dixie in this inspiring story of hope.

Auggie Jones lives with her grandpa Gus, a trash hauler, in a poor part of town.  So when her wealthy classmate’s father starts the House Beautification Committee, it’s homes like Auggie’s that are deemed “in violation.”  But Auggie is determined to prove that there’s more to her—and to her house—than meets the eye.

What starts out as a home renovation project quickly becomes much more as Auggie and her grandpa discover a talent they never knew they had—and redefine a whole town’s perception of beauty, one recycled sculpture at a time.

Holly Schindler’s feel-good story about the power one voice can have will inspire readers to speak from their hearts.

From the very first page, I was rooting for Auggie. She’s what I think most would consider the underdog.  Living with her grandfather in the less affluent part of the neighborhood. Forced to move schools after her old school is closed down. Writing to a mother in California who never seems to find the time to write back. Auggie is the type of girl you want to hug and fix things for.

But Auggie doesn’t need somebody to fix things for her.  She’s got grit and determination and an unusual eye for beauty.  She’s not one to be kept down.

And neither is her Grandpa Gus, which is why I invited him on the blog today to share a little bit more about what has happened at The Junction of Sunshine and Lucky.

Hi, Gus!  Thanks for stopping by today!  I know you’re a busy man, so I’ll get right to it.  Tell me a little bit about what you do?

Well, I’m a trash hauler.  Doesn’t sound like such a fancy job, and it isn’t.  Really, I’m retired.  Get “security checks,” as Auggie and I are always calling them.  Trash hauling’s something I do on the side.  Got my old truck—Old Glory, we call her—painted up on the doors, with “Gus’s Salvage.”  Even got a winch on the back, so I can pull old cars out of muddy spots and rivers where they got abandoned.

And you’re raising your granddaughter, Auggie, right?  Tell us a little bit about her.

Little Sister, I call my Auggie.  Since it feels like I’m raising daughter number two—a little sister to the first one.  Right about the time she got sent to a new school, she realized she and I don’t really just live in an old house—it’s, well, it’s poor, too.  Got it in her head that she wanted to spruce the place up.  But like I told her, “Poor folks have poor ways.”  We couldn’t afford a bunch of fancy new stuff for the house.  Had to use what we could—which turned out to be the stuff I picked up as a trash hauler.

You and Auggie live in Serendipity Place and there’s been a lot of chatter surrounding your neighborhood lately. What’s going on?

A fancy new committee recently formed—The House Beautification Committee.  Decided to clean up old neighborhoods like ours.  And when Auggie and I started working on our house, boy, did they get mad!  Started sending us warning notices and fines…but what could we do?  We’d put in stained-glass windows and glass-filled Quikrete on our walk!  Wasn’t like we could just take it off anytime we wanted.

But the committee didn’t like the rest of Serendipity Place’s updates, either.  We’re all getting fined.

So you and Auggie have been hard at work.  Can you share a little bit of your project?

Sure—like I said, we’ve been using the stuff I pick up as a trash hauler.  But we’re also using an old welding torch I had from back when I was a full-time welder.  We’ve taken junked cars and old water heaters and toasters and a hundred other discarded items and turned them into metal flowers and sculptures of people who dance and jump rope and play Duck, Duck, Goose, and anything else that Auggie can think up.

I’ll let you get back to work, Gus.  But just one more question.  If there’s a message you want everyone who hears about you, Auggie, and Serendipity Place to hear, what is it?

Sometimes, “pretty” and “new” aren’t the same thing.  Seems to me, something that’s old can be every bit as pretty as something that’s still got its new shine on it.  Funny, isn’t it?  Auggie found her own “shine,” her great special talent, by finding what’s pretty in rusted, old, discarded stuff.

Thank you Gus (and Holly!) for visiting today.

Words of Praise for The Junction of Sunshine and Lucky:

“Axioms like ‘One man’s trash is another man’s treasure’ and ‘Beauty is in the eye of the beholder’ come gracefully to life in Schindler’s tale about the value of hard work and the power of community…Auggie’s enthusiasm and unbridled creativity are infectious, and likeminded readers will envy her creative partnership with [her grandfather] Gus.” – Publishers Weekly

“Determined to save her home, Auggie [uses] pottery shards, vivid glass, and metal sculptures [to] transform the house’s exterior into a vibrant expression of the love within its walls.  In Auggie, Schindler creates a spunky, sympathetic character young readers will engage with and enjoy.” – The Bulletin for the Center of Children’s Book Studies

“The protagonist perches in the reader’s heart as she goes about trying to “‘discover her shine.’”  – NY Journal of Books

Site for young readers: Holly Schindler’s Middles – hollyschindlermiddles.weebly.com. I’m especially excited about this site. I adored getting to interact with the YA readership online—usually through Twitter or FB. But I had to create a site where I could interact with the MG readership. I’m devoting a page on the site to reviews from young readers themselves! Be sure to send your young reader’s review through the Contact Me page.
Group Author Blogs: YA Outside the Lines (yaoutsidethelines.blogspot.com) for YA authors and Smack Dab in the Middle (smack-dab-in-the-middle.blogspot.com) for MG authors.
THE JUNCTION OF SUNSHINE AND LUCKY Trailer:

Link to purchase on Amazon:

everything you think you know.

It’s too late for you. You’re dead. Those words continue to haunt Claire Cain months after she barely survived a brutal beating in Chicago. So when her father is offered a job in another state, Claire is hopeful that getting out will offer her a way to start anew.

But when she arrives in Peculiar, Missouri, Claire feels an overwhelming sense of danger, and her fears are confirmed when she discovers the body of a popular high school student in the icy woods behind the school, surrounded by the town’s feral cats. While everyone is quick to say it was an accident, Claire knows there’s more to it, and vows to learn the truth about what happened.

But the closer she gets to uncovering the mystery, the closer she also gets to realizing a frightening reality about herself and the damage she truly sustained in that Chicago alley….

Holly Schindler’s gripping story is filled with heart-stopping twists and turns that will keep readers guessing until the very last page.