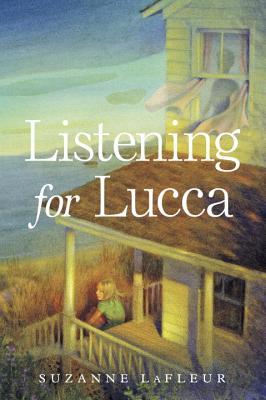 Listening for Lucca by Suzanne LaFleur

“I’m obsessed with abandoned things.” Siena’s obsession began a year and a half ago, around the time her two-year-old brother Lucca stopped talking. Now Mom and Dad are moving the family from Brooklyn to Maine hoping that it will mean a  whole new start for Lucca and Siena. She soon realizes that their wonderful old house on the beach holds secrets. When Siena writes in her diary with an old pen she found in her closet, the pen writes its own story, of Sarah and Joshua, a brother and sister who lived in the same house during World War II. As the two stories unfold, amazing parallels begin to appear, and Siena senses that Sarah and Joshua’s story might contain the key to unlocking Lucca’s voice.

Siena feels isolated and lonely in her Brooklyn hometown, so she’s not really bothered by her parents’ decision to move the family to the Maine coastline.  In fact, the move is almost comforting.  After all, she’s been seeing the beach house in her dreams for a long time now.  So moving into the house is familiar somehow. And then there’s three-year-old Lucca, who just stopped speaking one day.  Maybe this slower lifestyle, this quiet beach town, will be exactly what Lucca needs to begin talking again.  After all, they’ve tried everything else.
So Siena is hopeful. Except that instead of becoming easier, things become harder.  Not only does Siena see things she’s not supposed to, now she begins hearing them, too.  And when she finds a pen that belongs to a long-ago child who lived in the house, things go from strange to truly bizarre.
This middle grade novel has  many swirling elements.  Ghosts.  Time travel.  Family relationships.  Guilt.  Sorrow.  War.  Adolescent crushes.  Selective mutism.  There are so many threads, but Listening for Lucca pulls them together so beautifully.  The story crosses between two different time periods, but LaFleur has developed each narrator’s voice distinctly, and the transition through time feels seamless.  While some weightier subjects, such as war and PTSD, are hinted at (the latter perhaps handled almost too neatly), the content remains on an age-appropriate/maturity-appropriate level.
I was fortunate to be able to read the whole thing in one two-hour sitting while traveling this weekend.  One of those experiences where you fall completely into the story, only to come up for air after the last page and realize how much time has passed.  Wonderfully woven story, distinctly crafted characters and an ending that, while somewhat predictable, leaves the reader satisfied.
Disclosure

2 responses to “Review: Listening for Lucca”