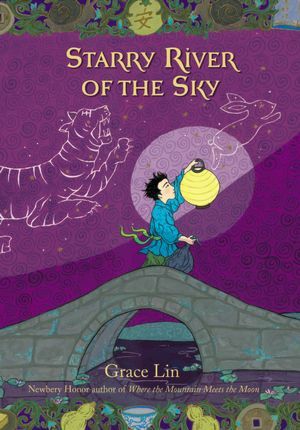 Starry River of the Sky  by Grace Lin

The moon is missing from the remote Village of Clear Sky, but only a young boy named Rendi seems to notice! Rendi has run away from home and is now working as a chore boy at the village inn. He can’t help but notice the village’s peculiar inhabitants and their problems-where has the innkeeper’s son gone? Why are Master Chao and Widow Yan always arguing? What is the crying sound Rendi keeps hearing? And how can crazy, old Mr. Shan not know if his pet is a toad or a rabbit?
s

But one day, a mysterious lady arrives at the Inn with the gift of storytelling, and slowly transforms the villagers and Rendi himself. As she tells more stories and the days pass in the Village of Clear Sky, Rendi begins to realize that perhaps it is his own story that holds the answers to all those questions.
My thoughts:

What attracted me to this book is that, at its heart, it is a collection of folk stories.  Specifically, Chinese folk stories. When I was teaching, we spent alot of time sharing folk stories.  Not just as an isolated unit, but throughout the year.  I wanted my low-income, untraveled, students to be exposed to other cultures, but in a manner that’s comfortable and relaxed and entertaining.  Not textbook dry.

Back to the library.  I picked up Starry River and was excited to start reading.  A few chapters in…I wasn’t hooked.  A few more…a bit better, but still wasn’t enthralled.  I kept reading because, to be honest, I was a little frustrated with me.  What wasn’t I getting that everybody else got?

And  then the main character, Rendi, began sharing stories.  And that’s when it happened.  Something in his voice grabbed me.  He was so obviously an unhappy child, and when the reasons why began to become apparent, I felt a stronger emotional response to his plight.  I wanted to remove his hurt and I silently cheered the gentle Madame Chang who oh-so-quietly-but-effectively acted as a balm. The theme of kindness and compassion is one that all children need to hear, repeatedly, especially when so much of what they see and hear in the day-to-day is the opposite.

Lin’s weaving of the main plot and the traditional folktales is seamless.  In fact, by the end of the novel, the two are so tightly woven that they are, in actuality, one.  And you can’t quite remember when the two paths merged.

I very rarely give up on a story because sometimes it pays off to get beyond the opening chapters, beyond the pages where you don’t quite “connect” the the pages where you do.  Starry River of the Sky is an example of one such case.  I’ve now added its companion, Where the Mountain Meets the Moon (2010 Newbery Honor) to my want-to-read list, too. Better late than never, right?